Album Review: The Paramedic – Diary Of My Demons 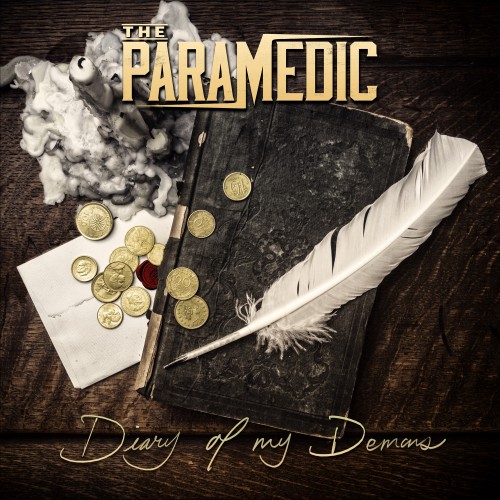 Diary Of My Demons is a big step up for The Paramedic after all, a record sure to please their growing fan base of scene kids. This is a band who I have criticized in the past, but it was mostly because of their horrible haircuts. The music itself isn’t half bad, it just isn’t what I generally gravitate to. That said, my job is not to wish every record was Minor Threat (though it often happens).

It’s 2014. I have to accept that the blend of overly-grandiose metalcore with synths and computerized clean vocals is basically a genre unto itself now and not compare it as much to the heroes of yesteryear. Once I did that, it was easier to enjoy Diary Of My Demons without a chip on my shoulder and see the band’s strengths rather than just their weaknesses (I was pretty harsh on them awhile back).

The group do not fail to have conviction on these ten tracks, with “Have A Nice Day” and especially fired up album highlight “Who I’ve Become” proving strong songs for vocalist Michael Luciano. They have some weird stuttery parts and interesting tempo shifts/elements. The vocals veer from full throated roar to almost R&B emo, with dude’s voice becoming either fun and infectious or at times a bit too soaring depending on your mood. You can’t say they lack conviction, though. The drum performance is also pretty crazy, though the drum sound makes it pretty hard for me to tell if these were just programmed or not (which is irksome). “Lying To A Liar” is the angriest song, a faster assault of a track than the poppier numbers which still finds room for a big chorus chock full of wordplay. There is a lot of emotional output here.

To read more click HERE and “have a nice day”…

The band know their range and kind of stick to it, with most melodies kind of charting the same territory but delivered with a lot of passion and impressive vocal control. “I’ve Been There” is a pretty cool song that volunteers “You’re not alone. I know cuz I’ve been there too” and is probably my favorite on the album. It just has a more uplifting and inclusive quality that I like, plus probably the coolest arrangement and some great sing along moments. Cool stuff.

These guys have lots of ideas and energy, though I’d prefer if they scaled back a bit at times and were less cluttered. Still, they aren’t a bad band for this genre and clearly put a fair amount of effort into this. I’m not a fan of the distortion tones on the chugging parts (just too thin of a guitar tone for me), but the leads sound great throughout the record and overall this is mixed in a way that kids ears are attuned to today with a lot of high end. You just can’t help feel like you are watching a mosh pit in an Iphone commercial at times instead of,say, in a moldy creepy dungeon like the new Vampire record. It is what it is. They aren’t a death metal band either.

My challenge to these younger bands in  rock is that when the big arena bands are gone, when there is no more Metallica, who will take their place? A7X borrowing heavily from the playbook of the past greats? Is it just gonna be EDM festivals? Angry at girls 67th wave metalcore songs from a plethora of bands that are all kind of similar, still? We don’t have to be that ambitious.It is fine to stay in the underground, but as Robin Williams said “No matter what anybody tells you, words and ideas can change the world.”

The Paramedic deal with real issues like depression and personal relationship anger or longing (like on the yearning and sweeping “Captivate”), sure to connect to a fair cross section of people. But the music scene seems ever more carved into sub genres these days, like that is the only way to sell records to kids who know what they are supposed to do when they hear a band with certain stylistic signifiers. It makes art safer. I’d love to hear more stuff like “My Life In A Bottle” from these guys, a moving song that really stands out from the others, ripe with a shifting balance of confidence, vulnerability and solos that sound like Whitesnake (haha).

All in all, there are some growing pains here, but a lot of heart as well. I certainly like the band a lot more than I did at one point and hope they continue to grow. There is a lot of potential here. I wonder who they”ll become.