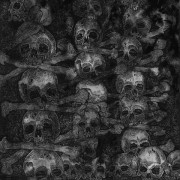 Italy’s The Secret is a fierce outfit, but nothing they do really hasn’t been done before. The group sound like a lot of other aggressive bands rolled into one, though they do deliver an impressively angry blend of crust, black metal and dissonant hostility. It reminds me of Temple Of Baal meets Converge, which obviously is not a bad thing. Solve Et Coagula was full of decent songs but mostly memorable for the cover art of a cool goat/devil creature. This time they get even more imaginative with artwork featuring…skulls.

Don’t get me wrong. It sounds like I am totally slamming them now, and this is a very good band. The contemplative lyrics alone on “Seven Billion Graves” makes them stand out, and no one said every band had to be as genre pushing as Enslaved, for example. “How much death do they need to let us rest in piece?” is a fucking tremendously potent lyric.

Kurt Ballou recorded this new LP at Godcity Studios, and while it doesn’t punch as hard as Black Breath or Xibalba (when it comes to recent devastating Southern Lord violent “core” releases), it still shakes things up. The standout performance is from vocalist Marco Coslovich who sounds like he is suffering in seven hells. This guy’s scream is like a medieval torture victim being flayed alive, except he is telling you in no uncertain terms to go fuck yourself as you torture him. Ballou captures devastating and tight performances from the group with his usual dry production values. Everything is hoarse, brittle and pushed in your face with a relentless snare drum cracking open your skull.