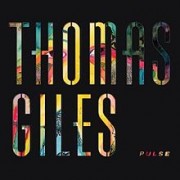 Thomas Giles aka Tommy Rodgers of Between the Buried and Me has released his solo opus. “Pulse” bravely moves through a phantasmagoric and imaginative score, leaving little to be desired, lest you were thinking this was a re-creation or extension of BTBAM. This primarily is a eclectic, more introspective and artistic album. The few hard and harsher compositions on the recording are few and fleeting. All eleven songs were written and composed by Tommy Rodgers and recorded at The Basement Studios in North Carolina. “Pulse” is available on Metal Blade Records.

This is not anything like Between the Buried and Me. While it does share some similarities, the differences are what make this stand out from Tommy Rodgers’ mainstay band. Foremost and first, his vocals are clean and layered in harmony for most of the album. The harmonies are nice and the rounds well versed. I did find that some of the note progressions a bit repetitive and cliche. “Armchair Travel,” “Scared,” and “Hypoxia” are very bare and stripped down songs, focusing mainly on vocals with minimal instrumentations.

On the opposite end of the spectrum, “Catch & Release”  is a drum and bass bomb waiting to go off with super layered vocals blended in with Rodgers’s trademark lyrical screams. “Medic” is a pretty straight forward rocker. It’s not too heavy on the synthetics, nor very long and drawn out. Kind of like wasabi, hot and painful at first, then goes away without a trace of every being there. Such is the transition of many the songs on “Pulse.” They all seem independent of each other, no contingencies left for the next to remedy.

“Sleep Shake,” “Reverb Island,” and “Hamilton Anxiety Scale” all seem to have been cut from the same cloth. Well-composed, outstanding songs with a lot going on lyrically and vocally, as well as maintaining a technicality that keeps listeners engaged. “Mr.Bird” and “Reject Falicon” left me with more to be desired. They both seemed like something was missing, while other areas in them were over accentuated.

I really did enjoy this album. Its artistry reminded me of another great modern composer, Trent Reznor. I feel this album and some of Trent’s work could easily stand side by side with each other. It has a great deal of depth and feeling while maintaining a crisp and rugged exterior for all to see.