Album Review: Through The Dark Rift – Control The Devastator 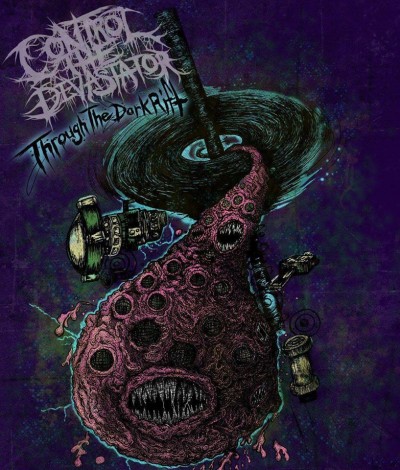 Control the Devastator are a newer band out of Snellville, Georgia playing a self-proclaimed mix of progressive, death and black metal.

They have recently released their debut album Through The Dark Rift via Steamroller Records.

Check out my review of that album here.

Through the Dark Rift starts with this eerie sound of wind blowing accompanied by sounds of heavy metallic doors being shut against heavy metallic frames, someplace far down a long and empty corridor.

Paul Golden’s first guitar comes in bringing the listener back to the fore, back from down the depths of that long corridor, back into the presence of the album. A clean guitar, that’s heavy and melodic, not trying to fit into any box of death metal or black metal or thrash metal or anything, just strumming along, creating the metallic riff that marches listeners into the depths of the album.

That first track, “Profusion” acts as an instrumental opening before the band plunges into the much more brutal “Temple”, which pummels listeners with Joshua McFall’s growl.

“I will show you this new world that will open your eyes to see!!” McFall growls at us, debuting Control The Devastator’s debut album.

Near the end of the track all instruments fall quiet and after just a moment of silence, just as the ringing stops, a guitar lick flares up and over that McFall growls: “Open your fucking eyes and SEE! THE! TRUTH!”

Control The Devastator bring silence via reverbed guitars growing quieter and quieter at the end of “Temple” and groove right into “Far Beyond Reality”. “Far Beyond Reality” is the first time on the album we see McFall exhibit his ability to scream. He delivers a raw, powerful, fast-paced screech reminiscent of black metal.

The fourth track, simple titled, “God’s” opens up with a display of Golden’s guitar virtuosity. As he plays licks down his guitar and the rest of the instrumentation provides a heavier ascending counter to that.

“God’s” continues to display Golden’s talent as the track enters an area of almost prog-melo-death guitar stylings with vocals underlain.

The guitar work and overall instrumentation in “God’s” is hypnotizing and complex. Well worth a listen.

The next track, “Horizon”, opens up with a completely different style – opening up to be vastly atmospheric. The track lulls and churns the listener through an instrumental experience of anticipation, before spilling them out onto the title track.

“Bloodlust”, the album’s seventh track, is arguably the heaviest, most groove-laden track of the album. By the beginning of “Human Assets” it seems all but officially confirmed that the Control The Devastator style is to follow one brutal track with a more melodic/atmospheric track, which creates kind of an ebb-and-flow that keeps the listener alert and conscious as they listen through the album.

“Human Assets” evolves into a brutal track all its own, and finishes by melding together the best of Control the Devastator’s brutality and atmosphere in a seven and a half minute magnum opus.

“Finding Fate In Fortitude” opens up with a chance for drummer Guido Hrovat to stretch his legs, and his arms in a spastic drum solo, before counting the rest of the band in on the hi-hat.

The album closes with “Mindless Masses”, which despite its seven minute duration, isn’t a standout track on the album.

Overall the style of the album was unique. Control the Devastator are doing their own thing, and it’s working fairly well. I look forward to hearing how they progress as they release new music.

More News On Control The Devastator: