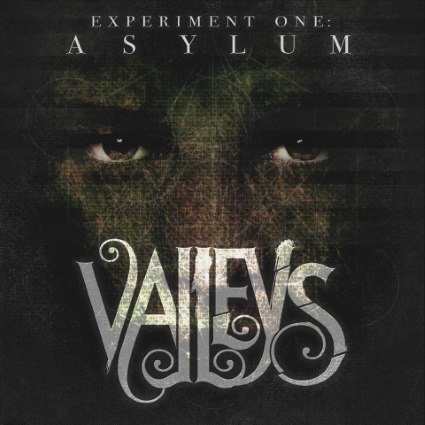 Raleigh’s Valleys have crafted a well executed progressive metalcore album with Experiment One: Asylum that is almost inhumanly spot on for genre style points. Like notes in a wine, the band cycle through atmospheric or djent-guitars, high vocal melodies that strive to fit into the progressive metalcore club rather than stray too close to clean mall emo vocals, etc. At their best they are a blend between some of Veil Of Maya’s edgier passages with potential (evident in the amount of hard work that clearly went into this) future Periphery-sized ambitions. For now, Valleys lack however the more original traits that make bands like Intronaut and Wings Denied or the ferocious new After The Burial stand out more.

Much better than most metalcore by numbers and capable than many new wave of prog metal bands, but not quite ready to write their Polaris.

Opening track “A Tension” sets a great, futuristic instrumental tone I wish the band had kept going with longer before the vocals sweep in and take over the mood, the backing band following suit. The guitar runs in this song alone are highly impressive, virtuoso shit. Vocalists Jayson Mitchell and Mikey Clement have a picnic time between Saosin and Whitechapel sharing is caring thing going on and it really works for the sound the band is going for. The screams are intense but on the new school side. Same for the cleans albeit thankfully not, again, as mall music emo as one might fear from any younger band these days.

Experiment One: Asylum was recorded during the summer and fall of 2015 and is produced by Paul Barton of 415 Recording, with mixing and mastering duties handled by Todd Borland of Borland Studios.

“We wrote this album as a concept on Multiple Personality Disorder because we understand how devastating this disease can be on the individual and his/her family. We wrote these lyrics and music as a way of hope for the people diagnosed with this disease. We want them to hear the record and hear the story of Asylum, the main character, and see that if he can fight the disease, anyone can,” says Mitchell.

Over ten varied tracks the band prove good work can be done in this sub genre of the family rock and metal tree, if without perhaps as much staying power as death metal or other forms. The future has yet to get out a verdict on that, but I’d be surprised if I am wrong.

The key track on this baby is “Choices”, in that the title summarizes that the band perhaps have too many at their disposal while also cramming in a ton of cool music within a 3:25 skeleton that you’ll be amazed is as short as it was for all the places visited. “Compassion”, the following track, is more of what I hope the band evolves into. Dreamier and more progressively unique territory than djent-a-thon, paired with almost post-hardcore meets Deftones screamed chorus dissonance. And really smart layering and almost a looping hip hop feel augmented by so many cool twists and turns including lighter passages that drift your head into the clouds while your head bops.

Whether raging in an asylum or looking for liftoff, this record will serve you well. “Finding Solace” climbs and slides about with leads up there with Scale The Summit for skillful and transportative.

Looking forward to the music yet to come from this band, though this is a very capable early effort.