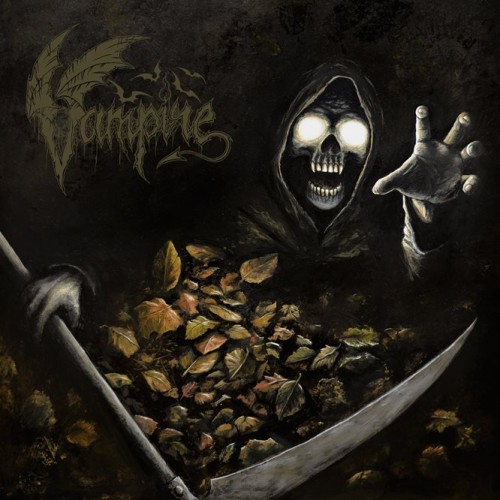 Some things can appeal to the “old school” and still have modern bite. Dario Argento’s masterful and really fun Dracula 3D venture appealed to classic horror fans as well as those seeking a little more gore or who just were thrilled by the bountiful, ginormous breasts of Miriam Giovanelli. Seriously, want to die happy? The very raw sounding in the best way debut full length from Vampire really tears throats in a similarly classic yet new fashion. How was there not a band called Vampire yet? Or Ghost or Ryan Waste’s new band Bat or even Giant Drag for that matter? Most of the good simple names like Trouble, Death or Satan are long claimed.

Unlike the new thrash revival, Vampire seem not to so much ape past greats as channel stuff they plain like. “Orexis” starts things off in a blaze of darkness and never looks back. There is also a  reverence for Hammer Horror here that is cited by the band and pretty apparent, similar to Cathedral’s recent aesthetic choices of primitive, basic root evil having maximum impact. Vampire sound like you found them in some crypt or playing in a shit hole somewhere with broken glass on the floor and a wobbly Crocodile beer teetering on a crackling amp. These Swedes are feral and far more concerned with just plain killing it than revisiting Swedish death metal history or 90’s gore. They even throw in the odd NWOBHM-tinged riff or three that would make Christian Mistress fans pump fists.

The pit worthy dry drum pummeling on tracks like the hellfire brain braising “Howl From The Coffin” evokes a certain dirty punk rock sense missing from a lot of metal and more akin to various eras of Darkthrone than tech death like Origin, Deeds of Flesh or the mighty Aeon, for example. This shit kicks out the jams like Slayer just did some cheap blow and hadn’t even thought of Hell Awaits yet. It’s mean, kids. Celtic Frost grunts and solos that sound like Morbid Angel still made music keep the blood flowing. Song titles like “Ungodly Warlock”, “At Midnight I’ll Possess Your Corpse” and “Jaws of the Unknown” assure maximum mood setting for a slaughteriffic listening experience. This band is top notch not because they are rehashing trappings of yore, but because this stuff feels real. This is not something you can easily fake. Remember the WWII-based movie Mother Night where the Jerries were more inspired by the undercover American spy (played by Nick Nolte) posing as a fascist? Good film. Sometimes fake or watered down shit fools people and inspires them more than authentic (not that anyone should be inspired by Nazi bullshit). That’s not the case here. This is real deal metal through and through. The analogue warmth on display here added to the frenzied attack of the band, savage attention to form and spook centric violence will keep you craving blood.