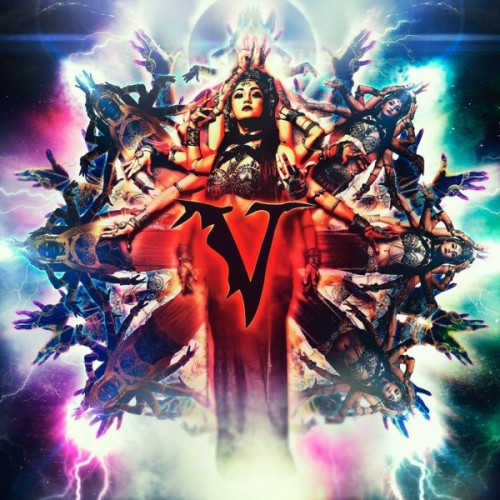 Matriarch is certainly a big statement for Veil Of Maya. New singer. Clean vocals. The amazing guitar-tistry of Mark Okubo. Like most of their records, there are moments of sheer brilliance that make it worth purchasing. Other sections however are kind of aimless or more textural than servicing the “song”. I remember Okubo once saying he didn’t like Jane’s Addiction in an interview, which bummed me out cuz they feature such great guitar skills but also can always deliver a solid song as well. Sometimes less is more.
Then again, with Veil of Maya you have room for many layers or approaches under one band name, parting the veils to keep searching for what it all means.

Without a doubt Veil seem re-energized, though I’d really rather hear them with less compressed sounding production. It’s just a tad too slick and not enough bass, though the guitar tones at times get fuckin’ glorious on the proggier, walky Okubo lines.

Vocals in Veil were always the weakest part. It happens a lot in newer tech or proggy or metalcore bands, vocals secondary to the complexity of arrangements in both depth and scope. Pop culture references abound in some of these bands or names from TV shows. Within The Ruins did a great job on their last record but it wasn’t so blatant. Though serviceable, Matriarch aims to focus on female power symobls and matriarchs in society but they should’ve pointed to Malala instead of, I dunno, fake movie and show characters.
Don’t get me wrong. These guys often really slay at times.

“Leeloo” is  pretty fantastic. Mark Okubo bugs out in distinct form. He is showing here that while he’s often being imitated poorly by other bands, he is the real deal. “Ellie” is dope, the whole song quite rad.Even the drum snare sounds markedly better, though I am not sure why. Intro like Counterparts shows real growth and a different tone. Strings, crazy, shifting rhythms! This is what’s up! Clean vocals also really make it cool. You can feel the band grinning and on a real push towards the next realm of their creativity. ID was my favorite release from them prior (and maybe still), the most overall gelled record they’d written. Moments here, including the fantastic layout, fulfill a lot of the band’s promise. But they remain inconsistent.

Suppose that’s a journey through maya itself.

“Daenerys” is one of most epic songs on record, a nice mostly half time anthem. One of band’s best riffs, almost like if Stratovarius was djent/metalcore…which sounds horrible, lol…but trust me, it is cool. The song loses some steam when gets plodding and chugga but we get some Okubo-tastic melodic math riffing to goo for about 1:15 in that kicks it all up a notch and the vocal melodies get insane and, dare i say, as competent as some of the best recent Periphery. Great tune overall. Expanding but not selling out their core vibes, I’d say. I’m a bit tired of bands dropping Game Of Thrones references as I have read the books for over a decade and a lot of people are late to the party, but that’s just geek gripes.

Big valiant effort on this record from the guys. Seriously must’ve been ton of work, more so than any veil release to date it feels like they buckled down and WORKED this material, which is saying something for a band known for tricky parts. “Lucy” has a riveting dillinger esque spazz fuck intro. Still, I’ve never been as impressed as much by some of these newer tech bands like Veil or Fallujah as much as , say, Botch or Zao. But Okubo was a cool dude when interviewed once for AMP, if I recall. Or maybe it was Crusher Magazine. I forget.

So many parts on a record like this make it hard to break down section by section. “Lucy” at 2:19 gets super heavy and one of moshier parts of record, like dying a wonderful death with your neck snapped by action heroine Scarlet Jo’s crotch.

“Mikasa” riff early in song pre chorus is like a freakin guitar solo for a riff. The song has best chorus though and is clear choice for best first single, as it indeed was. Killer blasting on this song, one of best ever drum performances from Veil. Good hook, can imagine a whole room singing at top of lungs.

“Lisbeth” from The Girl With The Dragon Tattoo is the finale song. The song does not make me think of her at all.I’d much rather listen to Karen O sing a NIN-esque version of Led Zep. Wasn’t feeling the chorus on this one either.

All in all, it’s a mixed bag but good for when you need a Veil fix. Worth owning though, for sure.