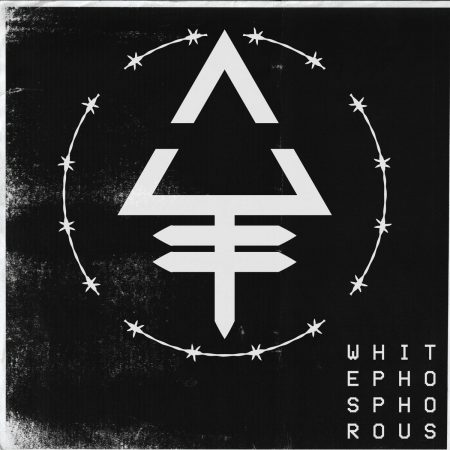 When writing about noise based releases I tend to try to evoke the feeling more than spending time attempting to wager what gear was involved or micro-manage increasingly sub-atomic sub-genres with fancy descriptors. Even though noise to some people is one of the more atonal and thus mechanical or perhaps dehumanizing of genres – the potential for dystopian hallucination running very high – I find that in itself lends me to have MORE not less of an emotional reaction. The best noise to me feels like immersion into a sort of industrial fan’s isolation chamber nightmare, black waves of dread or out of body astral projection above dead cities calling my name in ghost impressions amidst static and blips.

The new terrifying WHITEPHOSPHOROUS release GOD//BLESS//AMERICA – a noise offshoot project of antifascist black metal mischief maker’s Neckbeard Deathcamp – delivers on most of the above checklist. If we were playing some sort of sick and sad bingo for the death of hope in this country, this could certainly soundtrack it if you add claustrophobic dread of state violence, gun addiction and a mounting wish to shake the complacent out of their shells. This is a really engaging tape release that you’ll want to listen to in a dimly lit room and question if your bills are even worth paying or if there is any way out of the hellscape. It’s a powerful surprise statement midway through an awfully fucked up year. From “Walmart Footsoldier” to the grim opener “226”, the release manages to find the sad heart struggling to sing and beat beneath the deep soul bruise and desensitization of a constant barrage of hate in our society. It’s ok to be angry and not accept this as a normal, ok life. It’s also ok to damn well give your listeners an out of body experience expressing your discomfort at things (“Predator” may be the, no pun intended, apex of that here) – the saddest realization being there may be nowhere left to go but up.