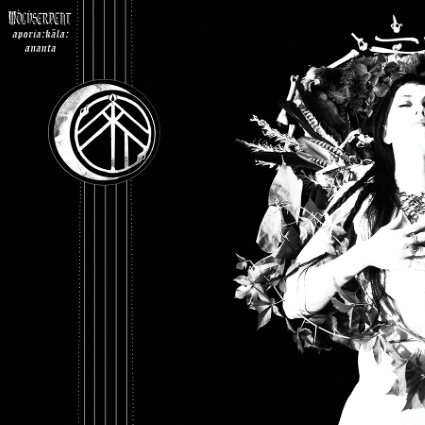 Sometimes pacing is everything. While we all have metal favorites that
bludgeon us to death right off the bat (Say, the majority of Kreator albums)
other times entertainment can be even more powerful through a steady, slow
build with sudden shocking moments of adrenaline. South Korean revenge film I Saw
The Devil builds terror and suspense through a rising feeling of dread and an
eventual complete blurring of moral lines, for example.

Boise, Idaho’s Wolvserpent have been refining themselves over the years, the
duo expanding their sound and coming ever close to really manifesting their
classical influences as equally as the “metal” aesthetic. These days the
boundaries are fuzzy anyway, with recent records by The Visit, Insect Ark or
Helen Money all stirring examples of what can be done with a cinematic
imagination and a ton of soul.

Wolvserpent’s new 40 minute single song Aporia:Kāla:Ananta (Pre order HERE) is breathtaking,
haunting and all the overused adjectives you can think of. Brittany
McConnell’s violin will make you cry and the 7:45 minute mark of the song had
my friend enter the room asking what movie I was watching because it sounded
like an epic western. But fear not, there is some real doomy Blake Green vocal
action also akin to some moaned Sunn O))) chanting behind the climbing wall of
sound, breaking at 11:30 and reverting to a mere trickle before we start a
similar process again.

Sweeping vistas of darkness and light interplay with the burdens and triumphs
of the human spirit, and if that sounds pretentious you just really need to
give this a listen. It feels like being vulnerable and brave all at once as
forces swirl around you. It’s very much as high art as anything from the metal
world can get, and that is a good thing. It feels like Wolvserpent are more
worried with creating “life works” than mere albums or time killing metal
jams. At 16:00 in you’ll feel like you watched a two hour movie, in the best
way. And that is scarcely the halfway mark.

This is precisely when things start to get really doomy and the bottom drops
out on the old West (er, North West) feel to reveal a yawning chasm of void beneath the
prairie. Charred black metal orchestration reigns triumphant for well past the
30 minute mark, the song eventually almost sounding like orchestral industrial
noise/feedback drone. The whole second half takes the real constitution of an
experimental music fan, but is equally rewarding and worthwhile.

Wolvserpent have made a true statement that defies casual listening and
becomes a veritable life force, self defining.