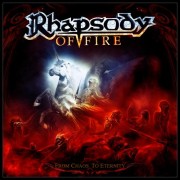 Rhapsody of Fire are proud to announce to the world, that the mix of “From Chaos To Eternity” is now at the end and that the new album will be released via Nuclear Blast on June 17, 2011.

Here’s what the band had to say about their latest album:

“It is the end of an era. This historical release will end the Rhapsody’s sagas once for all after 15 years of fantasy oriented lyrics and for the last time we’ll hear Sir Christopher Lee narrating in one of our albums the last dramatic events of a legendary tale started in 1997 and told through 2 different sagas and 10 full length albums. We are surely very sad but we also know that for this same reason the upcoming release will remain in the history of the band for its artistic importance and unique epic!”

More News On Rhapsody of Fire: