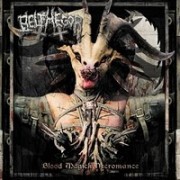 Belphegor is a band that you need to take notice of, whether you like your metal to be blackened death or deathly blackened, Belphegor can and will confidently deliver it to you in blood-soaked spades. Through many line-up changes over the years, the bands core and leader, Helmuth has managed to keep things fresh and exciting while incorporating more atmosphere and memorability into Belphegor’s mix of brutal, yet majestic, sacrilegious heresy. The band has never been one to shy away from controversy within their brand of metal, and have been one of the very few bands that can bring a bleak nihilism, and even a sexuality to their metal that most bands couldn’t even fathom about where to begin in incorporating such an idea or more-so, an ideology.

It seemed that the metal world, critics and fans alike, began to take more notice of Austria’s Belphegor with the release of the bands fourth studio album, “Lucifer Incestus”. Since then the band has made sure to not rest on it’s laurels and has not only stayed prolific, but have made sure to up the ante with each subsequent release up to and through 2008’s “Bondage Goat Zombie”. It seemed that the bands formula hit a minor bump in the road with their last album, “Walpurgis Rites – Hexenwahn”, as most of the metal world were not as impressed with said album as they had been with “Bondage Goat Zombie”. In defense of “Walpurgis Rites, “BGZ” is arguably the best album the band has released in their career, and trying to top it was going to be a near impossible task for “Walpurgis Rites”, no matter how good it was. Though here we are in 2011 and those blasphemous Austrians have not only released a better album than their last, but have many calling “Blood Magick Necromance” the best thing to come from the tiny country since Arnold Schwarzenegger.

Get your blackened death breakdown here.

“Blood Magick Necromance” really doesn’t throw out any curve balls and may seem a bit redundant to the casual listener, or to fans that have become too used to hearing black/death metal with middle eastern melodies, i.e. Behemoth and Nile. When truely taken in and absorbed the album shines with an atmospheric magic(k) that when over, will have you salivating, like Pavlov’s dogs, for a repeated listen.

In this time we live in there are so many things vying for our attention and metal music is no different. With literally hundreds and hundreds of bands trying to gain some sort of acknowledgement and or acceptance from us, a band not only needs to, but has to offer, and deliver a product that can grab your gut, wreck your neck, and cradle your soul. This is where Belphegor achieves success with “Blood Magick Necromance”, for songs like “In Blood – Devour This Sanctity”, “Impaled Upon The Tongue Of Sathan”, and “Sado Messiah” definitely grab your gut. In fact, they not only grab it, but thrust a long rusty blade deep into it, twisting side to side. The sheer brutality of tracks “Angeli Mortis De Profundis”  and “Possessed Burning Eyes” are nothing less than seething. The former fitting nicely behind “Discipline Through Punishment” with it’s more droning death call.  Pure emotion is conveyed in “Rise To Fall And Fall To Rise” and the title track, “Blood Magick Necromance”. Both of these songs, being my personal favorites from the album, show a sophisticated take on drawing a more personal feeling from the listener than your standard metal band. Rotting Christ knows how to do this, as well as Hypocrisy, and Amon Amarth, and it is exactly those bands that Belphegor bring to mind when their riffing and melodies begin to intertwine into a pathway of transcendence for the listener.

The vocal department of “Blood Magick Necromance” is nothing short of fantastic. Helmuth delivers a bevy of growls, roars, rasps, yells, screams, and just about everything else in between, knowing exactly where to place each for maximum effectiveness. In fact, it seems that Helmuth knows exactly what he wants to be in Belphegor and exactly where he wants Belphegor to be. This not only comes through from the material presented on “Blood Magick Necromance”, but from the stellar production work of Peter Tagtgren (Hypocrisy). One could easily get lost in a tangle of blasts, squeals, and grunts in the complexity of the material presented, but the experience from Tagtgren helps propel the band to grandoise heights of clarity, without losing any grit needed to convincingly play any form of death or black metal.

Belphegor is on a roll, or at least back on track, depending how you felt about “Walpurgis Rites – Hexenwahn”. I’m not quite sure if they have topped “Bondage Goat Zombie”, but I can say that “Blood Magick Necromance” comes very, very close. For anyone that calls themselves a fan of extreme metal, especially of Belphegor’s previous blackened-death art, then “Blood Magick Necromance” is a mandatory purchase for you.