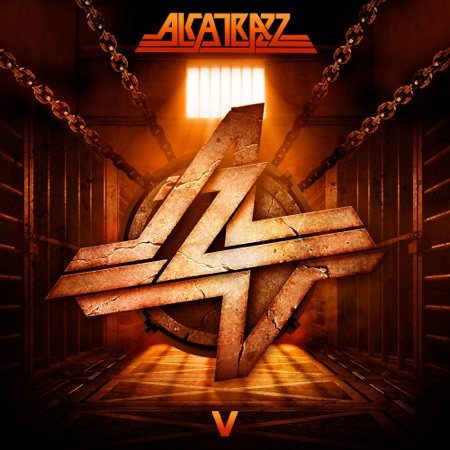 Mighty Los Angeles-born, guitar-driven, heavy metal icons, ALCATRAZZ, announce the release of their fifth studio album, aptly titled V, which is set for release via Silver Lining Music on October 15th, 2021.
In advance of the release of V, ALCATRAZZ today unveils new single/video, “Sword Of Deliverance,” and as far as lead statements go, it’s one hell of a reminder that when ALCATRAZZ is firing on all cylinders with all guns blazing, they are a vital part of any metalhead’s day. And there is little doubt that ALCATRAZZ 2021, featuring Doogie White on vocals, founding members Jimmy Waldo and Gary Shea on keyboards and bass respectively, Mark Benquechea on drums, and Joe Stump on guitar, are the chemistry causing the musical fire.
“‘Sword Of Deliverance’ is a mighty, metal monument,” affirms White, “a call to arms for the ALCATRAZZ collective. Loud, proud, and ready!”
Produced by Giles Lavery and Jimmy Waldo, and mixed by Andy Haller (Elton John, Joe Cocker, System Of A Down), V also includes guest appearances from Saxon’s Nigel Glockler (drums on “Guardian Angel” and “Blackheart”), Tank’s Cliff Evans (bass on “Grace Of God”), and Donnie Van Stavern of Riot (bass on “Guardian Angel,” “Nightwatch,” and “Target”), underscoring how perennially popular ALCATRAZZ’s music remains with their peers. V stands for ALCATRAZZ’s fifth studio album of course… but it also stands just as resolutely for Victory; the victory that sees ALCATRAZZ 2021 stronger than ever despite all the odds.
V is available for preorder at THIS LOCATION.
V Track Listing:
1. Guardian Angel
2. Nightwatch
3. Sword Of Deliverance
4. Turn Of The Wheel
5. Blackheart
6. Grace Of God
7. Return To Nevermore
8. Target
9. Maybe Tomorrow
10. House Of Lies
11. Alice’s Eyes
12. Dark Day For My Soul