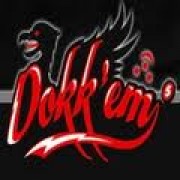 Swashbuckling pirate metallers Alestorm have confirmed that they will be play Dokk’em Open Air 2011. Alestorm and Pagan’s Mind are the first confirmed names on the bill for the sixth edition of Dokk’em Open Air. The festival, located near Dokkum, takes place on Friday 26 and Saturday 27 May 2011.

A press release had this to say about Alestorm: ‘Pirates’ metal band Alestorm will make a strong contribution to the joy we’ll have in the sixth edition of Dokk’em Open Air. Expect a fusion of heavy metal, folk and sleazy metal. Alestorm is a real partyband, where beer may flow richly. The band  started off as ‘True Scottish Pirate Metal’ band, which is a parody on the Scandinavian ‘true’ black metal scene. But soon enough the new launched genre was taken seriously.”

Alestorm is currently undergoing an extensive European tour with Sabaton, in which reportedly most shows sold out.