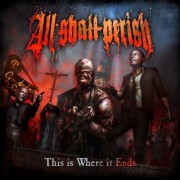 California extreme metallers All Shall Perish have posted the second video commentary of  their upcoming album “This is Where it Ends.” Guitarists Ben Orum and Francesco Artusato discuss tracks five through eight of the band’s fourth studio album.

The album is due out on on July 26th in North America and July 29th, 2011 in Europe via Nuclear Blast Records.

More News On All Shall Perish:

More On: Death Metal, Video, All Shall Perish, Nuclear Blast
share on: