Amorphis to enter studio in September 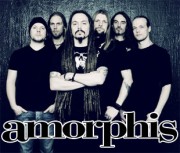 Nuclear Blast have just announced that Amorphis will be entering the studio in September to begin work on their 11st studio album. The as of yet untitled album will be a follow up to the bands 2011 effort The Beginning of  Times and is set for release March/April of 2013 via Nuclear Blast.

“Finnish melancholic dark metal forerunners Amorphis have just announced that they will enter the studio in September to record their yet-untitled 11th album, the follow-up to 2011’s highly successful masterpiece “The Beginning Of Times” (Finnish charts: #1, German charts: #16). Production and mixing duties will be taken over by no less a figure than Hypocrisy and Pain mastermind Peter Tägtgren, who worked with bands such as Children of Bodom, Celtic Frost, Immortal and Dimmu Borgir in the past. Amorphis’’ guitarist and founding member Esa Holopainen comments:

“We had to face the fact that if we want to develop our music and sound we need a producer who has a vision and whom we can accept as an authority, for I know that we’re not the most flexible guys when it comes to letting outsiders into our camp for telling us how to do things. We spent one evening at our management office, talking about the right producer and the recording sessions in general. As usual the best decisions are not far to seek. We’ve been talking to Peter about him producing Amorphis for ages – I think the first time we spoke about this was when we met first at the Nuclear Blast festival tour in 1994 and it was in Helsinki around a year ago when we last speculated about the idea. We’ve been following Peter’s career – he’s developed as a musician and especially as a producer over the years. Plus he’s one of the true survivors from the 90’s death metal scene who is still around just like us, so we share kind of an “old school” mental level.”

The recordings are set to take place in the famous premises of Petrax Studio in Hollola (Nightwish, Children of Bodom, Korpiklaani) and 5K Studios in Helsinki. Esa explains:

“We’ve decided to record in Finland, so that Peter can come here to escape to Petrax in the countryside together with us in order to record all the drums plus some additional lines. Later on, we’ll continue in Helsinki at 5K Studios to lay down the rest of the material. The mixing will be done with Peter in the Swedish Abyss Studios. We’ll keep you posted about how the sessions proceed!”

As far as the new material is concerned, Esa’s elation is contagious:

“Over the last couple of weeks we’ve had some really intense rehearsing for the forthcoming album. Originally we laid down around 20 new songs as demos, now we are proceeding with 14 tracks. I’m really thrilled about the idea to take a major step away from the so-called routines that we’ve had with our last records.

While promoting “The Beginning Of Times” we started to feel that we were giving the same explanations over and over again when people asked about the studio process and how the songs came about. Even though the music was very strong, the making process didn’t offer any surprises and appeared to be quite secured. Now the addition of a new dimension to the developing process has inspired us to focus on our material even more. The songs are extremely strong, bombastic and skull-pummelling. Though it’s too early for a statement like this, I’d already love to say that we’ve created the best Amorphis album ever. We’ll do our best!”

If you haven’t caught Amorphis live so far, you better hurry: “We’ll be finishing our `The Beginning Of Times´ tour in December in Finland. These are the last shows we’ll play before our new album comes out, so try to catch us if you can!”