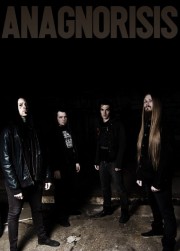 Kentucky black metallers Anagnorisis have completed the recording of their second album Beyond All Light, which is slated for a summer release.