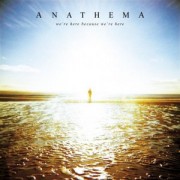 While the style and sound of Anathema has changed over the years, fans of doom metal will be happy to know their newest album entitled “We’re Here Because We’re Here” is set to release on June 7th on The End Records. Even better, a North American tour has been announced, as the band will support Blackfield with a handful of U.S. and Canadian dates.

A special, limited edition deluxe edition will include three bonus tracks, 7 inch with two unreleased tracks, and a DVD 5.1 surround version of the album, along with the stereo version, both mixed by Steven Wilson of Porcupine Tree.

5. Angels Walk Among Us

1. Angels Walk Among Us – Demo Mix