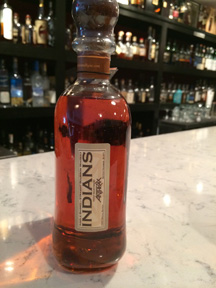 Funny, I was just this very morning reflecting with journalist Brian Krasman on bands who had done craft beverages. I remembered Daylight Dies made beer and Brian told me 1349 had one ( I hope it comes with plague mold ergot)! Maynard also has his wine place though I think  liked the Dave Matthews wine better (does that make me lose metal points?).

Anyhow, the thrash titans Anthrax, still the funnest of the classic thrash bands around attitude-wise, have unveiled a friggin’ bad ass bourbon today called…Indians! Yes, one of the most rad ‘thrax songs of all time is now drinkable. Now if only the NFL would change the name of the Redskins to The Arrows, we would be in a much better world already.

What better way for the members of Anthrax to celebrate their sixth Grammy nomination than to toast it with a glass of their own brand of bourbon, “Indians.”
Read the full announcement/bourbon roll out, below. I don’t drink anymore, but cheers to the boys on their Grammy nomination for the Dio cover. It is cool they were nominated along with Slipknot, Motorhead and Mastodon, though I was annoyed about Tenacious D (no offense to Jack and KG at all ‘cuz they rule)…but really, in a year with more great metal than maybe ever, the last nomination slot ought to have gone to Triptykon, Castle, House Of Lightning (so siiiick), Vader , anybody.

Anthrax has aligned with Jefferson’s Bourbon, the Kentucky-based company that produces special, limited edition “small batch” whiskeys by blending a variety of aged bourbons and rye whiskeys. Anthrax’s “Indians,” a single barrel bourbon, was personally chosen by the band and will taste like no other due to its particular blend and the barrel it was aged in.

“We’ve been wanting to come up with a special item like this, something that was unusual, one-of-a-kind, not a t-shirt or hoodie or poster,” said the band’s Frank Bello “and ‘Indians’ was perfect.”

Anthrax’s “Indians” bourbon is now available exclusively through Atlantic City Bottle Company – http://acbottlecompany.com/ . “Indians” will be priced at $75 per bottle (in-store pick up) and $100 (shipped to an address) and will come with a signed piece of the stave of the barrel that the bourbon was aged in.

Anthrax – Bello, Charlie Benante, Scott Ian, and Joey Belladonna – lifted their “Indians”-filled shot glasses last Friday when they found out that “Neon Knights,” the band’s cover of the Black Sabbath song (from Sabbath’s 1980 release, “Heaven and Hell”) recorded for the “Ronnie James Dio – This is Your Life” tribute album got the nod in the Grammy Awards Best Metal Performance category.

“It’s been an honor everytime we’ve been nominated,” said Anthrax’s Benante, “but this one is particularly special. To have been asked to contribute ‘Neon Knights’ to Ronnie’s tribute album was an honor on its own; to have it nominated for a Grammy is just beyond the best.”

Anthrax has just gone into the studio to begin recording their next album, the follow up to 2011’s critically acclaimed, Grammy-nominated Worship Music.