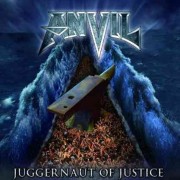 Toronto Heavy Metallers Anvil are streaming their whole new album “Juggernaut of Justice” on their MySpace page. The album is set for release on May 10th, via The End Records. Click here to listen to the album.

A special edition two track single featuring the tracks “Juggernaut Of Justice” and “FukenEh!” was made available on April 19th at select indie retail stores.