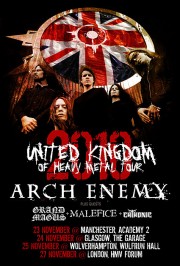 Swedish Melodic death metal band Arch Enemy has announced the dates for its 2010 United Kingdom of Heavy Metal Tour, featuring Grand Magus, Malefice, and Chthonic. Arch Enemy, a supergroup formed in 1996, is set to start recording a new album in December. Their last studio album, “The Root of All Evil”, released under Century Media records, was a re-recording of older tracks with the newer members of the band; the exception being the title track which was a remix of their older instrumental song, Demorality.

Also hailing from Sweden, Grand Magus is a heavy metal band that just released “Hammer of the North” on Roadrunner Records this Summer. The album is their fifth studio album, and was given Metal Hammer’s Album of the month honors in July.

British heavy metal band Malefice, formed by friends at college in 2003, played on the Jager stage at Sonisphere UK. They have released three studio albums to date, the latest being “Dawn of Reprisal” on Metal Blade records.

Taiwanese black metal band Chthonic will also be joining them on the tour. The have released five studio albums, with the most recent of which being “Mirror of Retribution” on Spinefarm records. They incorporate the ancient Chinese instrument erhu  or Chinese violin into their music.