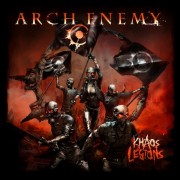 Swedish melodic death metallers, Arch Enemy, have released the music video for their song “Under Black Flags We March” off their latest album, “Khaos Legions.” This is the third video from the album and it was directed by Patric Ullaeus and it’s the first video to feature the band’s new guitarist, Nick Cordle.

“Khaos Legions” was released in June 2011 through Century Media.