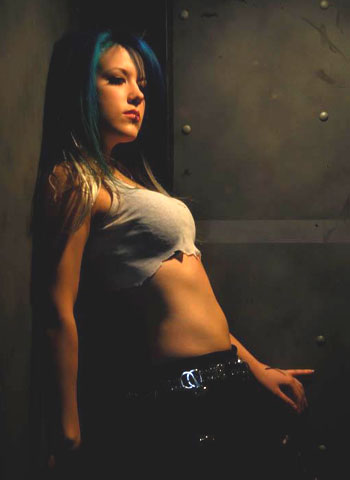 So Arch Enemy shocked everyone earlier in the week and announced Angela Gossow will become the band’s manager and pass her vocal torch on to ex-The Agonist vocalist Alissa White-Gluz.

Angela Gossow, who joined ARCH ENEMY in 2000 and made her debut on the now classic Wages Of Sin (2001), will be stepping down as front-woman and focusing on the band’s management. Now it’s time to lift the veil and present the new line-up with the title track of the upcoming album “War Eternal”. The video was produced by the band’s long time friend Patric Ullaeus.

Alissa kicks butt and, while she doesn’t have the fear inducing and able to dominate your puny manhood in five seconds glare of the formidable Gossow, Alissa still manages to sound really fierce on this new track. Today is a great day. Fred Phelps is dead and choking on Satan’s ding dong. I just heard the new Hellyeah album and it blows away all their old stuff. Agalloch have a new song. And now this! Horns skyward!

Chief song-writer, guitarist and band leader Michael Amott comments: “This is a day to remember. It is such a great feeling to come back with new music and to unleash the first single and video off ‘War Eternal’. Behold the first chapter of the new Arch Enemy saga… This is f**king war!”

ARCH ENEMY will unleash their 9th studio album, War Eternal, worldwide via Century Media Records and Trooper Entertainment in Japan in early June 2014. “War Eternal” was recorded in various studios during Winter 2013/2014 and produced by the band themselves. Jens Bogren (Opeth, Paradise Lost, Kreator) mixed and mastered the album at Fascination Street Studio. The “War Eternal” digital single cover was created by Gustavo Sazes, while Costin Chioreanu (twilight13media.com) is working on the album cover that will be presented soon.