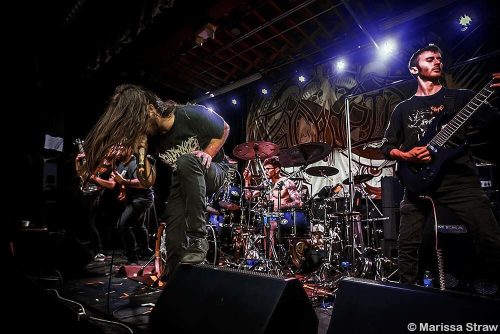 California death metallers Arkaik have signed with The Artisan Era to release their newest album, due out next year.

Ahead of next year’s release, Arkaik have released a lyric video for their song “Supernal Flame.”

After the release of Nemethia in 2017, the band has added new guitarists Cris Portugal (Enslave the Creation) and Alex Haddad (live for Vale of Pnath, Dessiderium) plus new drummer Nathan Bigelow (Singularity) who had previously played live for Alterbeast and Virvum. While a new bass player had been added, the band is currently working on a permanent replacement to be announced when the time comes.

Arkaik will be touring this fall with Beyond Creation, Fallujah, and Equipoise on the Algorythm North America tour from September 20th to October 22nd.

Arkaik vocalist Jared comments on signing with The Artisan Era:

“It’s definitely a massive honor to be a part of The Artisan Era family. They have consistently been putting out forward-thinking, top-tier progressive metal and we feel like its the perfect fit for Arkaik. The enthusiasm from supporters of the label is also extremely humbling to be a part of. It’s really exciting for us because its also a new era in the band, so couldn’t be more stoked to be working with them now.
We’re still pretty deep into writing the next album, but we wanted to put out a new song with this announcement. We picked a song that we felt would be a good fit for a single and went to our trusted audio engineering wizard Zack Ohren in Oakland. He engineered and mixed the song and we got our friend Mendel bij de Leij (ex-Aborted) to master the track. They were a perfect combo to be working on this song and they nailed it.

Lyrically the song ties all our previous concept albums together into one song. It acts as an overview of the entire journey of Cyrix, through the last three albums, up until now, and points to where we are going next. We’ve never done a stand-alone single like this, so I felt like it would be a cool opportunity to tell the story as best I can in one song. If you want to learn more about our history and concept albums, check out the podcast I did with Steel Legion Podcast here. You can follow the Arkaik Street Team Group on Facebook here.

Thanks to everyone who has been supporting us through the years, Arkaik wouldn’t exist today if it wasn’t for you. Cheers!”

Check out the lyric video for “Supernal  Flame” and Arkaik tour dates here.