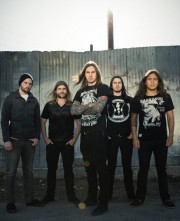 As I Lay Dying have taken home the ‘Best Hard Rock’ award at the San Diego Music Awards, making them winners for the fourth time in their home town.

Check out the full list of award winners here.