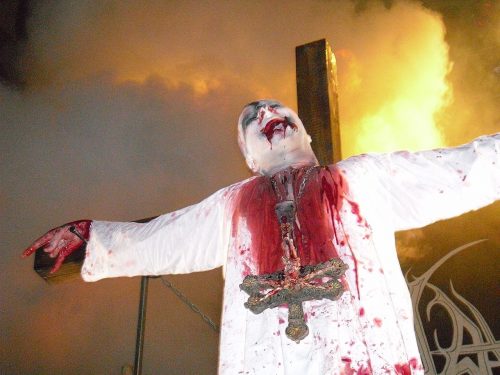 Mayhem’s famed vocalist Attila Csihar has been on some of my favorite records but I shouldn’t be surprised he is sharing transphobic imagery given he is in a band with noted unapologetic shit troll Hellhammer (who has never walked back “adequately” numerous super fucked up racist or homophobic comments over the years). Sorry you think dressing like an evil tree is somehow more valid than actual gender identity.

The meme he shared is of some chud with a shirt that says- “Transvaccinated- I am not actually vaccinated but I identify as someone who is vaccinated”. Csihar shared it in the context of being detained in Norway because of some quarantine rules and saying it is the New World Order.

First of all, it is a total false equivalency and secondly trans people don’t deserve to be stigmatized by people who don’t understand sex and gender are both a spectrum and that viruses evolve around vaccines if given room to grow.

I believe in giving people a chance to improve in society but it is super discouraging as a trans person to see people just not give a flying fuck about the harm they are causing us. I even ended up defending myself from friends of his in the metal scene like Kim Dylla saying I was bringing my politics into a post and ignoring what her friend Atilla wrote about his situation. WELL…the issue is also that regardless of one’s stance on his “situation” he paired HIS POLITICS with a transphobic as fuck meme, so gaslighting me about it doesn’t change that photo which I can see with my own two eyes.

Even Shane from fucking Napalm Death liked dude’s post. WTAF. I feel like throwing up. I am so fucking bummed out.

Glad at least Cattle Decapitation and Vile Creature members and a few others besides just me told him the post was shite.

As Emma Watson notes , “Trans people are who they say they are.”