“Where do we go to escape the end of the world?” August Burns Red ask. The answer most likely lies within the Lancaster, Pennsylvania quintet’s upcoming release on Solid State, “Leveler.” We have just over 55 days until the release of the highly anticipated new album. Twelve tracks are on the standard issue album, with a bonus four on the deluxe. Like 2009’s “Constellations,” this recording was produced by Jason Suecof, who is also credited for work with All That Remains, Whitechapel, Job For A Cowboy, and many others within the metalcore and death metal genres. “Leveler” was recorded at his home studio, Audio Hammer, in Orlando, Florida.

“What we were going for with the cover was an image of a house that had been destroyed by a natural disaster,” says Brubaker. “The cover depicts a house that has been leveled by something like a hurricane. You can see the trees in the background are bent sideways from enduring strong winds. There are a bunch of chickens in the foreground who have come out of hiding to continue on with their daily activities. The chickens represent the calm after the storm. They represent life and the promise of a new day. The art has a real indie-rock vibe to it, which I like because while we’re obviously not an indie band, we’re not a typical metal band either.”

Currently, August Burns Red are preparing a European tour, then returning to the U.S. for Warped Tour. 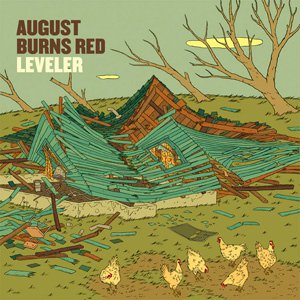