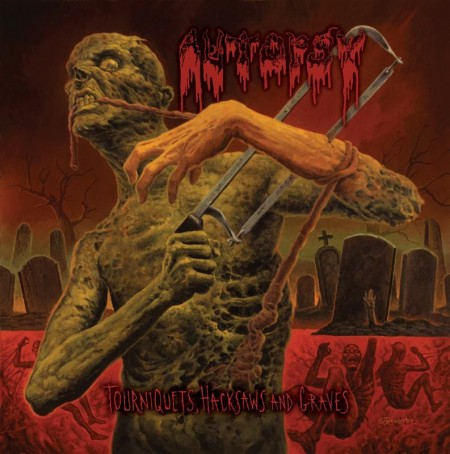 The album will be released in North America on April 29 via Peaceville Records.

Read a comment from the band on the album here.

“TOURNIQUETS TIGHTEN….HACKSAWS RIP…..GRAVES ARE FILLED…..THIS IS AUTOPSY, THIS IS DEATH METAL…. With the stench of ‘The Headless Ritual’ still permeating the befouled air, Autopsy has once again come for your very metal soul with their newest blood soaked homage to all things dark, twisted and horrific….once again bone crushingly heavy nightmares await….’Tourniquets, Hacksaws and Graves’ will awaken the most depraved part of the coldest zombie’s stare…..blood will flow, brains will be destroyed, coffin lids will be opened…”