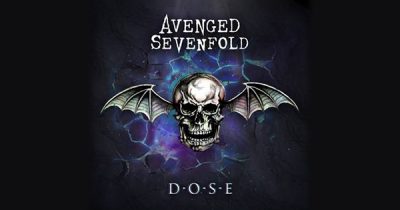 First came their cover of Mexican folk song “Malagueña Salerosa,” followed by a reimagining of Mr. Bungle’s “Retrovertigo.” Now Avenged Sevenfold continue the rollout of new tracks with the release of “Dose,” a song originally intended to be part of the track listing on newest album, The Stage.

“Musically, ‘Dose’ was supposed to be a Part 2 to “Roman Sky” and had a very cinematic feel, but we turned it into more of a tripped-out metal song,” says vocalist M. Shadows. “The lyrics were inspired by an unsolved mystery that dates back to the 1950s about an airline traveler who, if you believe the story, supposedly fell into our dimension from another. According to reports, he showed up in a Tokyo airport with a passport from a country that didn’t exist anywhere on a map. He was detained for questioning, but mysteriously vanished from a room guarded by immigration officials, taking with him all evidence of his existence. It ties into the theory that there are infinite possibilities of our lives being played out across space and time. Don’t know if the story is true, but I’m fascinated by that kind of stuff and thought it’d be a fun idea for a song.”

Check out the song, which almost comes off like A7X with a Soundgarden feel, below.