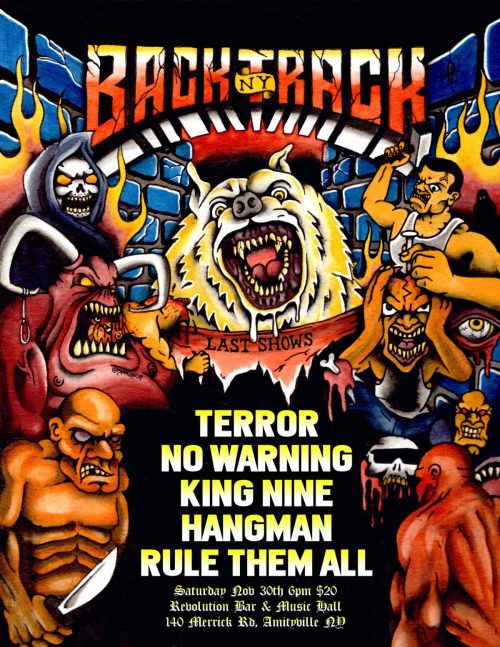 New York hardcore outfit BACKTRACK has announced the band’s final two shows ever, confirmed to take place this November on their Long Island, New York hometown turf at the conclusion of their ongoing international final tour.

After eleven years as a band, having toured most of the planet several times over with countless other acts, and having released a long line of releases through several notable labels, the members of BACKTRACK have decided to go their separate ways on good terms. However, before they shut it down for good, they’re going to hammer the planet with an incredible amount of touring throughout the rest of 2019.

Following their East Coast US tour with Dead Heat and Rule Them All June, and West Coast US tour with King Nine, Minus, and Somerset Thrower in August, a tour through the Southeast Asia, Japan, Australia, and more during September and October, BACKTRACK is set to begin their European Farewell Tour 2019. Running from October 30th through November 14th, the tour features shows in Greece, Spain, Netherlands, Switzerland, Germany, Poland, the UK, France, and Hungary.

Upon their return from Europe, BACKTRACK will tear a hole in Long Island with their final two shows ever with two hometown gatherings. Both shows will take place at Revolution Bar & Music Hall in Amityville, New York. Friday, November 29th, BACKTRACK will be joined by Down To Nothing, Mindforce, The Fight, and a special guest yet to be announced. The previously-posted final show, Saturday, November 30th – which sold out in several days – will see BACKTRACK joined by Terror, No Warning, King Nine, Hangman, and Rule Them All.

Tickets for the 29th show are on sale now and but will not last! Find them HERE.

BACKTRACK has been an imposing force looming over the underground music scene for over a decade, having cemented their name in hardcore lore one record, tour, and diatribe at a time. Their output seethes with the tough-as-nails posture of Killing Time and Agnostic Front while snaking through glimmers of crossover

The members of BACKTRACK collectively offer, “We appreciate everyone who has shown this band love over the past eleven years. Thanks to anyone who has supported us along the way, and we look forward to seeing you one last time.”