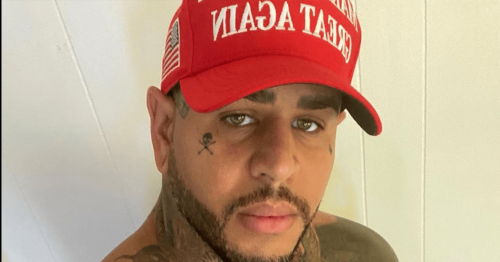 Tommy Vext of Bad Wolves went full Maga Clown this week, right in time for a GOP coup of the Supreme Court that threatens women’s rights, the division of church and state, environmental protections, LGBTQ, corporate abuse and so much more! But don’t worry! Tommy says on his Instagram that there are studies that say climate change is natural anyway! That’s as moronic as believing the Earth is flat or systematic racism doesn’t exist and we live in  meritocracy. How does Linda Perry, who I believe writes songs for Dorothy, feel about this? How does Dorothy!? Doc Coyle was in God Forbid! This is wack af.

It isn’t free thinking to join the endorsement ranks of the KKK, Lil Pump and the Taliban, Tommy. It’s dumb as fuck and chauvinistic. Also, you blocked my verified Puerto Rican girlfriend – the singer Globelamp- for critiquing you for not caring how it will affect women’s rights and falsely equating social democracy with ‘CoMMuNism’. Here is an article about how Trump is similar to Castro, dude. Don’t get it twisted. Bernie is a democratic socialist, not a communist. And Biden is a centrist!

Oh no! Unions! A social safety net for the marginalized! Dudes who might care (or you think would care) about marginalized groups still often don’t blink when women are on the political chopping block. And now, a patriarchy loving cultist being rammed into the supreme court isn’t good for women.

Trickle down economics is piss for the poor. It has always been a gop lie. And acting like business tycoons care one iota of a fuck and will be ethical if deregulated is so beyond crazy I don’t know where to start, but it seems to be a core belief of people conned by those who think objectivism is at all feasible or moral in a corrupt society. You are only helping vulture capitalism and entrenched white supremacy.

It also matters that all people who can get abortions rights are threatened! They probably just think it is murder. Abortion rates don’t drop from banning them. They just get more dangerous and more people die! That is not pro life!

Bad Wolves (and the drummer of System Of A Down for that matter) can get in the fucking garbage.

Y’all got the bag so now you don’t care about marginalized folks? You dare to pretend Trump has been cool for LGBTQ? Ben Weinman super bummed me out today being on insta telling Tommy he had “balls of steel.” More like shit for brains.

It is super sad to see Tommy misled and fall for horrible propaganda. I have moshed my heart out at Vext/Candiria shows many years ago. It is akin to mental illness to believe Trump- a serial mafia backed grifter failson RACIST- and I am not sorry in the slightest for saying that. I am not saying I get to decide how he votes and I am white as snow but he seems like the snowflake for blocking critique, especially when the alt right cry they have been shadowbanned and about ‘FreEDumB Of SpeEECKKKCGGH!’ at every opportunity when people don’t want to host their hate enabling viewpoints. I am a demiflux pansexual, despite my skin color. And diabetic. Both of which also make me unsafe in Trumplandia.

Anyway, get a fucking clue Tommy! Pathetic! Go fuck off with 50 Cent and Ted Nugent into delusion land. PS Antifa serves a god damn purpose. Last I checked it was the same thing we pretended to care about in ww2, dipshit.