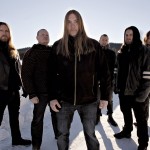 Formed in 2008 by its namesake, Sarke is a mesmerizing journey through dark and soothing soundscapes inspired by legends like Mayhem, Slayer, Darkthrone, Celtic Frost, Black Sabbath, Candlemass, Motorhead and Kreator.

All music and lyrics are written by Sarke, but adding the legendary voice of Darkthone’s Nocturno Culto has brought another dimension to the grimness.

Sarke’s new album, “Oldarhian”, will arrive in stores via Indie Recordings on April 15, 2011.