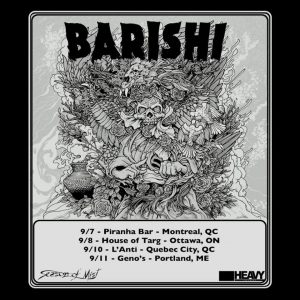 Barishi are a band more fans of the proggy side of more extreme metal should really be aware of if they aren’t already, combining melodic and intricate guitar passages with pained chords barely contained by the marching and elaborate yet tasteful rhythms. Almost like a more harsh yet compatible cousin of some of the Hark or Baroness stuff with much more snarling than bellowed vocals, Barishi’s Blood From The Lion’s Mouth turned some heads in late 2016. Here and there a few of the guitar textures even remind me slightly of Quicksand (who incidentally have a new fuckin’ record on the way).

Anyhow, Barishi are headed out on a short Eastern Canadian run in early September. The band will be making stops in Montreal, Ottawa, Quebec city, and more.