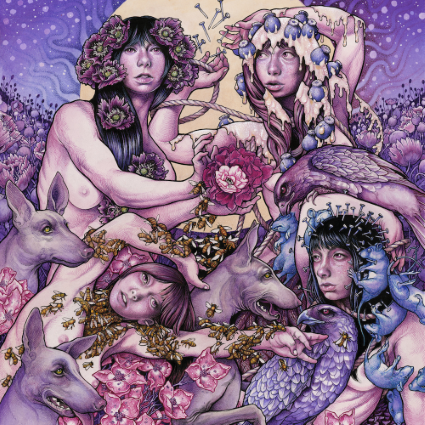 Baroness are streaming hotly awaited album Purple in full. The record is a bit heavier than Yellow and Green were but retain a lot of the cool dynamics that made those records an evolution. While Blue Record is still my favorite of their colorful career, this album is brilliant and has some seriously great tunes like sludgy and precision drumming opener “Morningstar” (sludgier than most recent Mastodon), the proggy “Kerosene”, hooky “Shock Me” and the sing a long/bad ass “Chlorine & Wine”. They have more than earned their staying power. One of the best bands in the rock world.

“While we realize the accident is obviously of interest, we have gone over that particular story’s details at length over the past few years,” Baizley says. “We feel that this album not only addresses but puts a punctuation mark on that story. Baroness existed before the accident and will continue to exist, and we’d rather talk about what we’ve created with Purple than let one side-story overtake or define who we are as a band.”