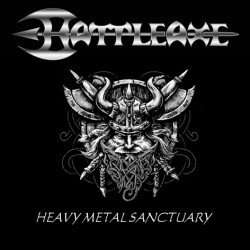 English metallers Battleaxe will release their newest album Heavy Metal Sanctuary on March 4 in North America. It will also be released on February 21 in Germany and February 24 in Europe. It will be distributed worldwide via SPV/Steamhammer Records.

Check out what the band had to say about the album as well as a video for the title track here.

The band on Heavy Metal Sanctuary:

“We can hardly believe that the task is finally over, the album that we never thought that we would complete is finally finished! It has been a long hard road against almost impossible odds and we hope that everyone out there are as pleased with the result as we are. If it were not for the devotion of all our fans old and new we probably wouldn’t be here today. It is you guys who resurrected this band! The songs are total BATTLEAXE and the production is better than we could have hoped for with a limited budget.

Thanks to Fred Purser and the guys in the band we have got this thing sounding massive! Many thanks to Olly and SPV for making the release of this album possible and for making the 21st century version of BATTLEAXE become a reality!”