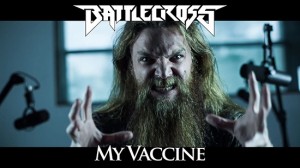 Detroit, MI’s Battlecross have released a brand new video for the song “My Vaccine” from their most recent album, War of Will. The Roy Warner directed clip takes inspiration from the cult classic film “They Live” and can be seen now exclusively at MetalInjection.net HERE.

It’s a little weird since Metal Blade already did a “They Live” inspired video when Woodstock’s awesome 3 put out their awesosme signature track “Alien Angel”, but ya gotta love Battlecross.

In other news, Battlecross recently visited the Center for the Intrepid on Friday, December 5th, prior to their show in Austin. The band toured the facility, and met with staff, as well as wounded veterans, some of whom were fans of the band. Read more about the facility and the band’s visit now on axs.com.