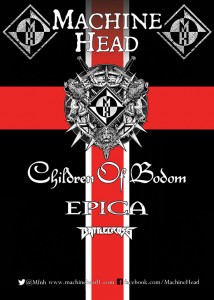 American thrash metal behemoths, BATTLECROSS, will join Machine Head, Children Of Bodom and Epica on a live takeover this Fall! Set to commence on October 4th in Denver, the trek will trample its way through two dozen cities, coming to a close on November 2nd in San Diego. All tickets will go on sale this Friday at 10:00am Eastern.

Comments guitarist Tony Asta: “What an honor to be on this tour! We’re really stoked to reunite with Machine Head and Children Of Bodom, both legendary bands and friends from last Summer’s Mayhem Fest, and to see what Epica is all about. This is a tour with something for every metal head and we can’t wait to be bring it brutal throughout the USA and Canada, banging heads and melting faces from coast-to-coast. See you in the pit!”

In related BATTLECROSSisms, the band will also be heading to Mexico City with Black Label Society, and then on to Brazil for three dates with Killswitch Engage and Memphis May Fire.

Relays guitarist Hiran Deraniyagala: “What a year this has been for us so far. We’ve been to Europe twice and now we’re going to Mexico and South America! We’re so honored to be invited to play with Black Label Society in Mexico City. We have so many loyal rabid fans there and we finally get to play for them! After that we fly to Brazil for three dates with our good friends Killswitch Engage, who we can’t thank enough for always inviting us out for awesome opportunities like this one. Get ready to rage my friends! This will be one for the books!”

Following three busy summers on the 2012 Trespass America tour with Five Finger Death Punch, Killswitch Engage and Trivium, the 2013 Rockstar Energy Drink Mayhem Festival and Metallica’s Orion Fest, as well as a series of European festival dates in June, BATTLECROSS looks forward to some time off before their October run of dates. They will use the time to write the follow up to War Of Will on Metal Blade Records, which debuted at #134 on the Billboard Top 200 chart, #118 on the top current albums chart, and #2 on the Heatseekers chart.