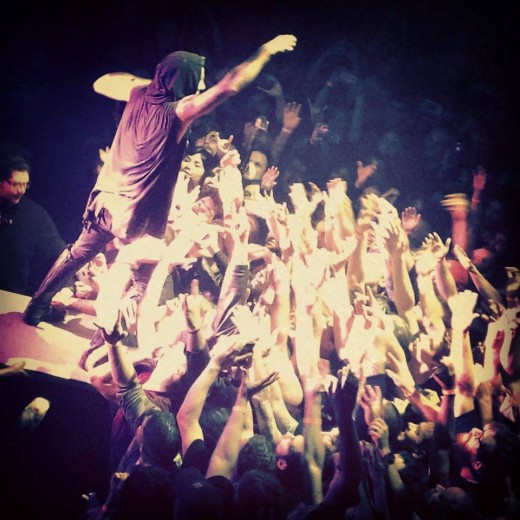 I don’t know about you, but I just turned 38. Any chance to break out of the
mundane and remember the mysterious or esoteric wonder behind the veil of
everyday life is a welcome release. When it comes in the form of explosive,
ethereal or downright menacing and theatrical metal, even better. Polish dark
legends Behemoth‘s current US tour promoting their most ambitious album to
date, The Satanist, with the much hyped Myrkur in tow on their first really
proper stateside trek certainly falls into the category of awesome excuses to
get out of the house…and it sure was.

Read more and see some killer photos in euphoria BELOW. 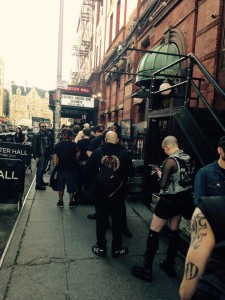 Webster Hall, one of the most famed venues in NYC, was packed to the gills. A
lot of fellow metal bloggers were in attendance as well as members of Meek Is
Murder and other NYC acts. I got to finally meet the awesome and funny Jessica
Pimentel of must hear NYC crushers Alekhine’s Gun who recently played a show
with my friends in Brooklyn’s finest math metal urban fusion legends Candiria.
She told me how a guy at a show creepily ran his hand through her
admittedly great hair at a recent gig and so she ended up punching him in the
neck. Don’t mess with metal ladies! You might know her also from the tv show
Orange Is The New Black, so this dude was extra stupid to mess with her, haha.

But yeah, three cheers for diversity in the scene. I give a lot of respect to
Behemoth for taking Myrkur out on this huge tour. The Relapse one-woman helmed
Danish ethereal and “black” metal project has gotten a lot of attention but
also heaps of very undeserved hatred from kvlter than thou absolute losers. Go
fuck yourselves, cuz no one else will. 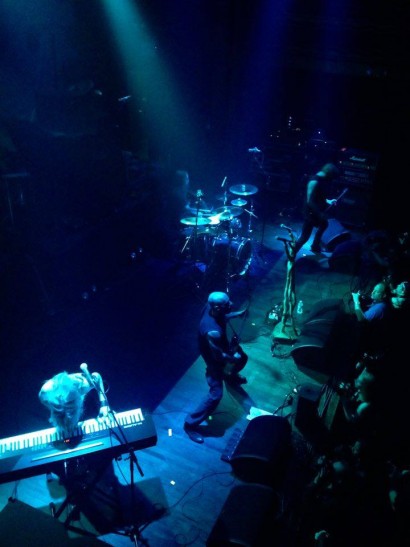 Amalie Bruun of Myrkur is talented as hell and I think she brings some very
refreshing elements to a scene often oversaturated with imitation. The Danish
slip of a woman looks like she rose up from a misty crag to offer prophecy
like the fairy queen Galadriel, capable of blowing away in a strong breeze if
it weren’t for her confident bearing. It was awesome to see that the crowd not
only didn’t give Myrkur hate (the haters must’ve stayed home) but was raptly
attentive or full on cheering and stoked for most of the fun set. I saw a lot
of metal press peeps warming up to the band more as well in the balcony.

They had a lot to prove. Behemoth are about as hard to open for as Slayer.
Harder these days, in my opinion. They are at the top of their game and as
commanding and ominous a band as exists on the face of the Earth. Shining and
Watain have pretty evil shows, for example, but Behemoth still make you leave
their concerts feeling like Satan dosed you with acid and questioning the
nature of everything. Goosebump shit.

I felt terrible for Amalie on stage at first as her keyboard had a false start
and it must’ve been a tense few moments up there under so many eyes while it
got sorted, but eventually the band delivered a varied and cool set. I’m not
sure if it was Øyvind Myrvoll on drums, anybody know? The kit- especially the
heavy toms- sounded better than almost any band I have heard drum sound for in
that room over the years. “Mordet” was a highlight, opening with a mid tempo
power riff that then explodes with speed. My friend Liz from Earsplit PR said
she thought the band would get more love if they weren’t marketed as much as
straight black metal as we listened to a particularly ethereal section of the
set (I personally am a sucker for that ghostly gossamer vocal stuff).

Closing with “Song To Hall Up High” (a solo piano cover of Bathory) and
exiting the stage to the instrumental “Norn”, you had to be pretty impressed
that the band pulled it off under so much pressure. 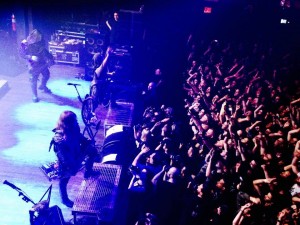 Behemoth were astounding. It was my first time finally getting to see them and they were nothing short of thrilling, terrifying, explosive, etc. There aren’t enough adrenaline-filled or evil adjectives out there. Nergal and company managed to even still seem completely imposing despite a brightly colored beach ball hysterically landing on stage during a number. 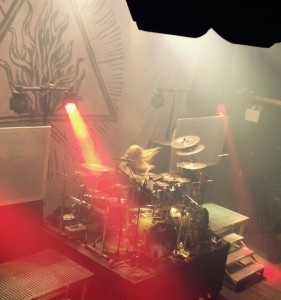 The Satanist is truly a landmark album not only for the band but for metal in general. I was wondering if the band could pull off the insane drumming, akin at times to the psycho speed of Septicflesh’s most blazing moments in many places. “Blow Your Trumpets Gabriel” ignited the room and the band never looked back, vomiting black clouds of apotheosis all over the assembled mortals. A black light of potential for the self, the group completely owned the gathering and had us all in the palm of their hands. The title track of The Satanist in particular…I am literally getting chills remembering how intense it was the next day. People were hurling themselves over the barricade only to come back for more, truly belonging to the music and the pits were wild. 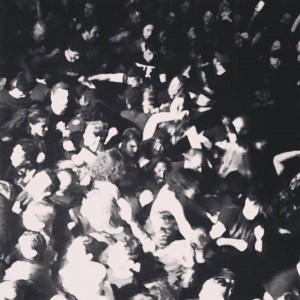 The most bad ass shit I have seen in a long ass time was when Nergal ran out on a hastily assembled ramp to lord over outstretched hands like a dangerously worshipped messiah, giving them some kind of offering from a sacramental goblet he was holding before running back and leading the band into the next number. A true survivor, deep intellect and by far one of the coolest musicians on the face of the planet. I’ve seen hundreds of shows over the years and Behemoth’s set might be in the top ten of all time for extreme metal acts I’ve witnessed. 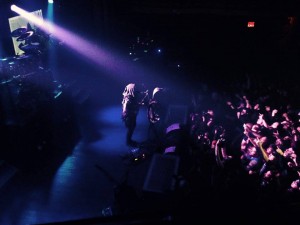 I was unable to stay for the encore as I had a two hour train ride back out of New York City, but by the end of “O Father O Satan O Sun” I was completely rocked into the cosmic netherworld anyway and totally satisfied. Fucking horns all the way! Come back soon. 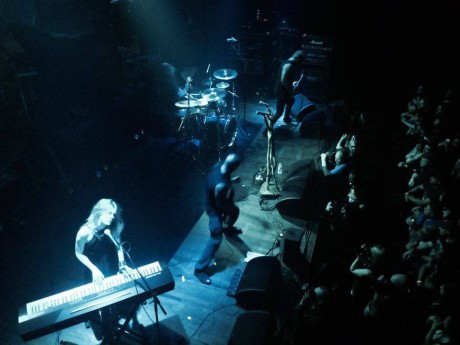 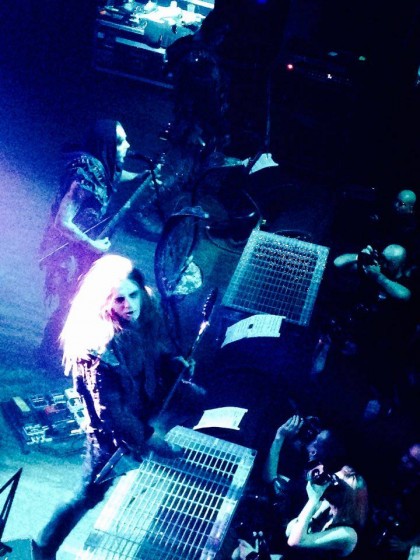 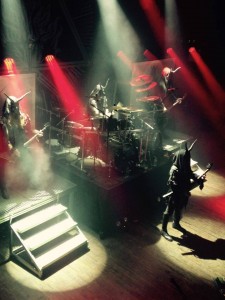 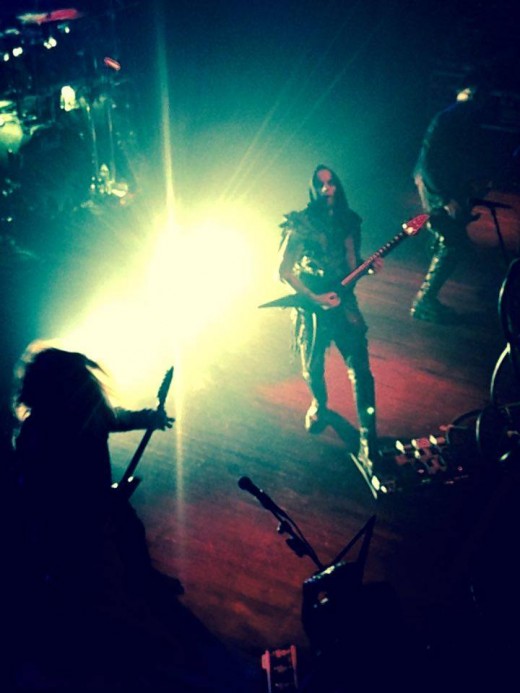