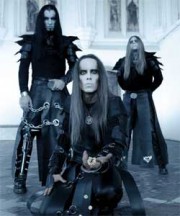 The Deccibel Magazine tour is set to kick off in less than ten days and a quick change of venues had to happen for night one of the tour. Behemoth has been banned from the Ohio venue The Brewmaster’s Gate because their religious beliefs conflict with those of the owners.

Behemoth’s vocalist, Nergal had this to say about this situation:  “Wow, big motherfuckin’ WOW! We are facing a legendary moment: Amerika, the land of the free, is banning Behemoth coz of religious beliefs. The madness starts in Ohio, but of korz we are playing anyway. Nothing can stop us now. God, please save me from this freedom…”

No need to fear for those of you who were planning on attending the show, a new venue has already been confirmed and the show will now take place at the Columbus, Ohio venue Al Rosa.

To see the all tour dates, venues, and cities click here.