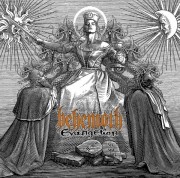 Polish death metal act Behemoth has released a trailer for the upcoming music video “Lucifer”, off the 2009 release “Evangelion” via Metal Blade Records. Check out the trailer here, as well as a making-of video here.

The video was shot in Wroclaw, Poland and stars the song’s guest vocalist, Maciej Malenczuk. The video is in the final stages of editing and will see a worldwide premiere in September.