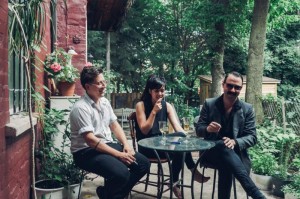 Montreal-based experimental trio, BIG|BRAVE, will embark on their debut European tour this Winter, the dates coming on the very day the band begins their three-city East Coast US run with Southern Lord labelmates Goatsnake and YDI.

Metal Riot conducted an interview with Robin Wattie recently HERE. I recommend reading it and enjoying life instead of suffering and wallowing in the dark with an awful sinus cold like I am at present.

In support of their latest innovative album, Au De La, released on Southern Lord last month, the band members are artisans of everything minimalist yet mammoth, with their sprawling and spacious sonic heaviness. BIG|BRAVE will tour through the East Coast US for three nights this week supporting labelmates Goatsnake alongside YDI on, beginning tonight, with shows in Philadelphia, Washington DC and Brooklyn. Just one month later, on November 19th, their maiden European voyage is set to begin. The tour sees them visiting Germany, the Netherlands, France and Belgium including performances at the Le Guess Who? Festival and and more, as well as supporting drone heavyweights SUNN O))) at the YOYO in Paris. The UK will then be treated to six BIG|BRAVE shows, including ATP’s Nightmare Before Christmas.