Bison premiere new song “Until The Earth Is Empty” at Decibel 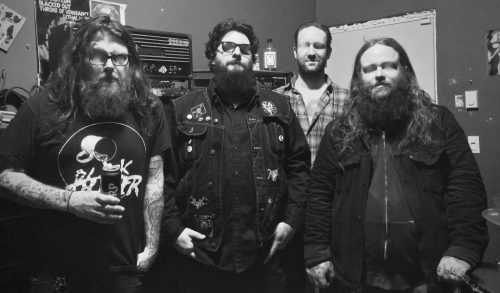 Judging by the above promo photo, Vancouver’s Bison have left their eyeballs wherever they dropped off the B.C. – but NBD! They still have ears you will notice and even if they were (probably are) deaf, the rumblings of their level of heaviness are so vast that the band undoubtedly would still manage to craft their brand of hairy, dimebag and meth pouch rubber banded to your nutsack in an NA meeting heavy sludge metal. Actually, hold the meth. I think eyeball eating bath salts and face picking methery are more of a Florida thing than Vancouver, though again we are wondering where dudes eyes are.

It’s raining hard and I just ate tacos and am severely unmotivated because I am in the middle of a move, but this new Bison track slays enough to postpone my nap over. Def feeling the cool rhythmic shifts and subtly melodic dissonant riffage. I feel like Ken Mode and Kowloon fans could also dig this as much as, say, High On Fire disciples. It even has a cool, kind of Cormac McCarthy-esque meaning. I assumed “Until The Earth Is Empty” meant they would party longer than humanity and be the last ragers on Earth (assuming Andrew WK or Keith Richards are not the last), or that maybe it was about our inclination as a species to head towards destruction full tilt. BUT NO!

“It’s something my partner said to me in regards to finding our sons, if they were taken or missing,” offers guitarist/vocalist James Farwell of the track. “It’s the idea that you would look for something or someone that you loved no matter how long it took, or until the earth was empty. In her case that would also mean killing everyone in her path. She is very passionate.”

Adds Decibel, “You Are Not the Ocean is loaded with sludgy, slow-but-focused riffs, melodic guitar solos, and heavy percussion, but it’s also emotionally heavy, as you can hear on new song ‘Until The Earth Is Empty.’”

Hear “Until The Earth Is Empty” courtesy of Decibel at THIS LOCATION. Annnnd don’t forget to pre order the new album HERE.