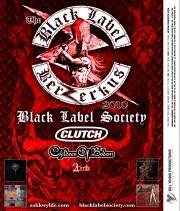 Zakk Wylde, the former Ozzy Osbourne guitarist, was looking at other rock festivals and saw the need for a value-priced tour of his own. It was an easy decision, says Wylde, summing it up like only he can, “If you don’t get invited to the party, start your f’ing own!” Children of Bodom commented, “COB is more than ready to head out on Berzerkus and see all of our great fans. Expect nothing but a good time, Bodom style!”