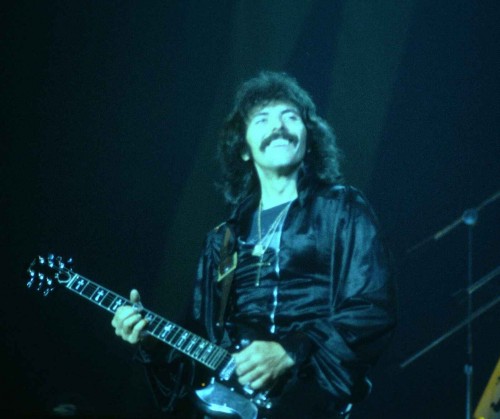 Thirty years ago, Black Sabbath as a band, an idea, and as a consistent part of heavy metal was all but gone. Starting with Heaven and Hell, the first Black Sabbath album without the original line-up, the band started to go through many odd years. Mob Rules saw the band down to half of the original members. Born Again was most of the band back together, with Ian Gillian on vocals instead of Ozzy or Ronnie.

But by time Seventh Star came out Black Sabbath was down to one original member, Tony Iommi. It stayed that way until Geezer came back in for 1992’s Dehumanizer. The band closed out with 1995’s Forbidden being down to just Iommi, again. Geezer and Iommi in the 18 year gap, played a lot of concerts with Black Sabbath, but no new music was recorded. Then starting in 2007 they worked with Ronnie James Dio and Vinny Appice in Heaven and Hell to record Live from Radio City Music Hall, The Devil You Know and Neon Nights: 30 Years of Heaven & Hell.

You can read more of this 30th anniversary retrospect here.

First things first, if the listener buys into Warner Bros bullshit and expects to hear Black Sabbath when they spin this album, they’re going to be severely disappointed. This is unequivocally  Tony Iommi’s debut solo album and it has a hell of a sound. I almost like that it went with a cohesive, singular vocalist as opposed to the trend amongst solo guitarists of featuring a single vocalist per song, which Iommi later tried… on Iommi (Iommi would ultimately settle on a singular vocalist on The 1996 DEP Sessions and Fused).

In ’86 Ozzy Osbourne released The Ultimate Sin and Ronnie James Dio released Intermission. I feel that these are important facts in considering the sound of the time. There are other ’86 albums, but I don’t want to spoil what I’m planning on covering throughout the year.

The Seventh Star lacked not at all in talent. In addition to Iommi, vocal duties were taken up by Deep Purple’s Glenn Hughes, Quartz’s Geoff Nicholls played keyboards and Kiss’s Eric Singer was on drums. There’s also Gordon Copley, who played with Lita Ford, who played bass on the song “No Stranger To Love”. The rest of bassist duties were conducted by Dave Spitz.

The album has gotten mixed reviews throughout its history, which can probably be attributed to a combination of over-saturation of a particular sound and the mistake of judging it as (or worse, against a) Black Sabbath album.

But additionally, Seventh Star doesn’t sound like heavy, chugging, pounding, Doom-Metal-Inspiring Black Sabbath. But, surprisingly, that doesn’t mean it sounds bad. In fact, I enjoyed it.

The album starts out with the track “In For The Kill” which is inarguably classic metal, but which I also feel the need to identify as this kind of proto-power metal, progressive sound. Hughes is going, ‘thro-oh-oh-oh-oooooohne!” and it’s great and it really works. It’s a great opening track and really sets the mood.

“No Stranger to Love” takes the listener in a different direction. It’s pure rock-n-roll love ballad. Get out the lighter and shed a tear or two! It’s songs like this one that really drive home that this should have been an Iommi solo album. No one ever will pick up a Black Sabbath album and expect “No Stranger to Love”. Plenty of people will pick up solo albums from ’86 and be like, “Hell yeah! This is my go-to break up song!”

Almost as soon as we were thrown into “No Stranger to Love”, we’re back to rocking and rolling in “Turn To Stone”.

The “Sphinx” track is nothing but instrumental, atmospheric noise, reminiscent of Pink Floyd, and breaking the listener from the rock ‘n’ roll to plunge them into the grittier title track.

At the end of the day Iommi and Hughes could have done anything. They could have went fully in any direction. Glam/hair metal. Speed/Thrash metal. Death metal, polka or new wave and it would not matter. People would find something they don’t like. Everyone’s a critic. When you’ve done as much work and made as many albums as Iommi and Hughes have, you are going to get criticized – especially with how needy and whiny ‘trve’ and ‘br00tal’ fans are. And if metal-music-makers and metal-heads cared what anyone (especially each other) thought? Well we might not have heavy metal music at all.

So on the 30th anniversary of this lesser-known, lesser-liked Black Sabbath album, maybe turn off the phone and turn off the lights and listen to it while you play you’re favorite video game (I’ll be playing Wolfenstein).

I rate this album 4/5 lighters in the air.