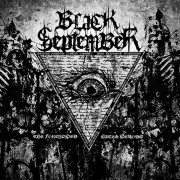 Chicago Death Metal band Black September, is planning for their debut album, “The Forbidden Gates Beyond,” to be re-released by Prosthetic Records on June 7th, 2011. The quartet was formed in 2006 based off of inspiration from bands such as Bolt Thrower, His Hero Is Gone and Bathory, amongst others, released several EPs and self released “Forbidden Gates Beyond,” last year.