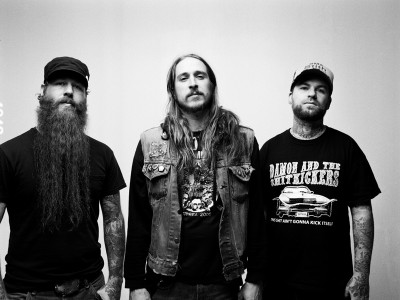 As they close out their last week of their extensive 8-week-long North American tour, Savannah, GA’s BLACK TUSK have unveiled another music video for their “God’s On Vacation” single from their latest album, Pillars of Ash (January 29, Relapse). Check out this NSFW video, directed by Alixandra Petrovich, now on Vevo and YouTube. “God’s on Vacation” also recently appeared in the Mortal Combat XL trailer and NPR said the song brings the past into the present with its “Slayer-slashed riffs, gut-curdling wah-wah, an unrelenting rhythm section and trashy-as-hell hardcore-punk hooks.”

Since their formation over 10 years ago, Black Tusk have established themselves as one of the hardest working bands in rock. After four full-lengths, numerous splits and EP’s and thousands of shows under their belts, the punk/metal power trio was faced with an immense and unexpected tragedy in late 2014 when founding bassist/vocalist Jonathan Athon passed away after a motorcycle accident in his hometown. Now, as a testament to his profound and lasting legacy on the heavy music scene, the band, which also features guitarist Andrew Fidler and drummer James May with Corey Barhorst (Niche, Kylesa) now on bass, are releasing Pillars of Ash, the culmination of three brothers-in-arms’ blood, sweat and tears, and is Black Tusk’s finest accomplishment to date.