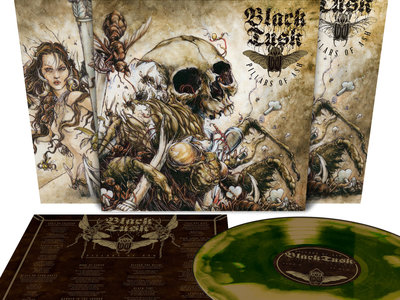 The death of Athon was a tragedy for metal and it is heartening to learn his final studio tracks will be included on a January release from Black Tusk entitled Pillars Of Ash. Despite keeping an ear to the ground, I had no idea about this and so was thrilled to get the news yesterday. Incidentally, while we’re on the subject of distortion and volume triumphing over tragedy I’d also mention Drew Cook of Dimesland, who passed away unexpectedly last year, is immortalized on that great guitar band’s Psychogenic Atrophy HERE.

But yes, NPR has the stream of a new Black Tusk single HERE. The song is as stomping and awesome as anything in the band’s rad catalogue and underscores their place near the top of metal’s upstart crop of most relentless bands. There is a dark, punk rock heart to this band’s sludge and it gives them a more rock n roll heart possessed by few bands this side of High On Fire, The Bronx and other really rowdy groups. Athon’s presence will always be felt. Truly one of my best memories as a music fan was that I got to share a small bill opening for them once while he was alive.