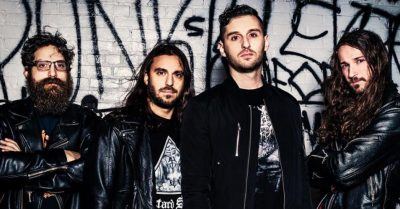 Thanksgiving is a time when many people look past the hideous aspects of history and focus instead on their stomachs, so what better way to spend the holiday than to pay attention to real world issues and promote a festival showcasing some of the best talent fighting fascism in metal? We are grateful to anyone who doesn’t have blinders on! A massive threat to society that edgelords and gaslighters try to pretend isn’t a problem so as to transparently help entrench the power of the at fault “alt-right” further, fascism has no place in any world that doesn’t want to destroy itself.

We are grateful for powerhouse and metal tastemaker/activist Kim Kelly for all the work she does, shots she takes and fucks she doesn’t give in pursuing what is right with the goal of making metal more inclusive and relevant in 2018. Suffice to say it is rad that the awesomely named Black Flags Over Brooklyn fest she has started has announced an initial lineup of Nazi detesting bands for a flagship 2019 kick off festival. This is sure to be amazing and powerful so stay tuned! Some of our favorites like East Coast black metal titans Woe and our #2 album of the year winners Vile Creature are already on board!

Announcing BLACK FLAGS OVER BROOKLYN 2019, an anti-fascist metal festival to be held at @BrooklynBazaar on January 25-26, 2019.
It's time to take our scene back.