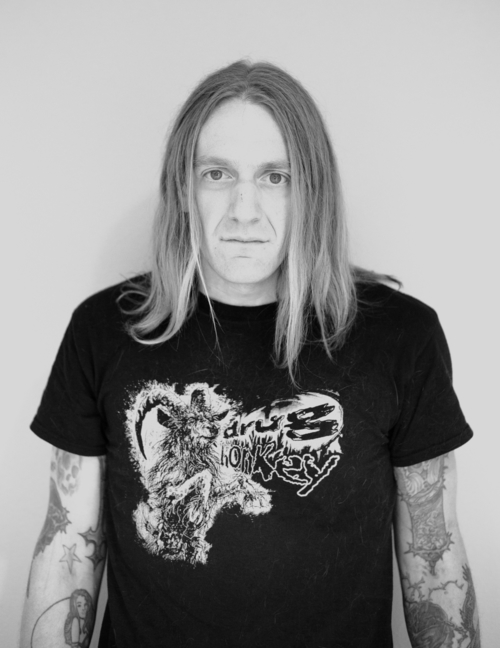 “Everyone is your enemy Everyone’s your friend. Every possible series of
events is happening all at once,” says Aidan Gillen (Pertyr Baelish) on Game Of Thrones at one point this season. I’m starting off this first post on the site about Nachtmystium in a few years with this quote because I always believe there can be many potential outcomes to a story or at least believe in rehabilitation. I also believe people can change but that sometimes they really hurt one another along the way and that often healing never happens.

I guess what I am trying to say is we all have the capacity to really let one another down or to choose a different path.

I didn’t cover a lot of Blake Judd’s near death spiral, robbing of fans and months spent homeless much the past few years. We had been pretty good friends at one point and regularly communicated during the middle to end stages of The World We Left Behind album. It really was a big bummer, as someone who kicked dope a long time ago but knows how wretched and self-erasing an addiction it can be, when I learned that my friend had bottomed out worse than ever. One of the last times I had talked to him he needed money and wanted to sell some artwork and I mentioned it to a popular occult artist friend of mine in Chicago, which never happened. But in hindsight for awhile felt really lousy wondering if it had been a hustle on Blake’s part, especially since he had never wronged me but I had learned he had obviously wronged others.

I also am friendly with some of his former Twilight band mates who had some major static with him towards the end of his tenure with the band and at other points. I’d never want to willfully upset those dudes as I love Stavros from Atlas Moth and we have met in person and get along pretty well. I also like Neill from Krieg who has arguably had the biggest rift with Blake and who was very kind to me with some good advice when I was not drinking for a few years around the time my dad passed. We communicate every so often and I have been loving the shit out of the Poison Blood record.

Hearing some of their concerns about Blake privately but also when I interviewed them or in other wider circulated articles was a lot to process. It was obvious Blake had really hit the skids and then I didn’t speak to him for several years after he deleted his social media for awhile. I was very reluctant to engage in tabloid style writing about him when he was down but also wasn’t against letting other bands say something on the site when it came up or was an elephant in the room that it would be weird not to address.

I am not here to give him a free pass in any way but also know very well that addiction can make you lie to your own mother and do things to people you love that you regret your whole life when you are mad with sickness. It rewires you and is a serious demon to wrestle with. Obviously his habit was a lot worse than most people ever fathom and it is good that he is now at least trying hard to currently refund fans at shows and otherwise. He is also very happy to have returned to the stage.

“I literally started crying playing ‘Eulogy IV’ (2nd song of our set). I was sweating my ass off so I dont think anyone could tell but tears were pouring down my face,” Blake told me in regards to his return show.

We finally reconnected the last few weeks and have had some long and frankly pretty solid communications. He congratulated me on embracing being trans and told me a lot about his current life. I am going to publish his answers to a very prying and direct no bullshit question of mine on a specific subject regarding a woman he was friends with and dated for a time who died as well as some content that was only available in Europe (about sobriety and some of the lowest points when he was basically off the grid the last few years) in a full interview in the coming days, but first he gave me a message to put out to some of his former associates and the metal scene.

For now I am giving him the benefit of the doubt and let him say his piece here, as he sounds like the person I knew when he was doing better. Here is his first statement:

“Neill has greatly exaggerated some things about our relationship, but I will never deny that I was not the friend he deserved me to be in the later years of our relationship. It troubles me to know that I obviously deeply scarred him on some very intimate level. I considered him a brother, literally, for a long time. Same can be said of Jef Whitehead. All I can say is that I hate what I let ego, addiction and greed cause me to do to two guys who I miss more than any two people that have ever come into and later departed from my life. If they had a chance to sit down and talk to me today, I am confident they would feel as though theyre meeting the guy they thought they were friends with again for the first time in many, many years. I wish them both well and I hope that time will heal their wounds imposed by me.”