Blood for Blood kicks out Buddha 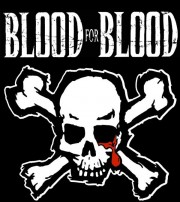 Boston hardcore legends Blood for Blood have released a statement announcing they have kicked out frontman Erick “Buddha”  Medina. This is in response to accusations that were made against Medina about a month ago. As far as what actually transpired there isn’t much detail, but the things being said are nefarious to say the least, and whatever happened Blood for Blood has seen fit to part ways with him. You can read the statement here.

“A month or so ago we were made aware of serious allegations against Erick “Buddha” Medina. Upon becoming aware of said allegations, we immediately cancelled our Boston and NYC shows, which were scheduled for the following weekend.

We have remained silent since, as the allegations shocked and devastated us personally. Also we did not wish to engage in any sensationalism (accusations, mudslinging, gossip, etc). We also hoped we might get a clearer picture of the situation. None of us were present at the time of the alleged incident, nor had we been made aware of it until nearly a month after the event in question transpired.

This band has seen its share of difficulties and personal crisis but this was a situation we were never prepared to deal with. And since we had no hand in creating this situation and can only react, we feel we have to be very clear.

Make no mistake, the nature of the alleged activity, true or false, is an affront to EVERYTHING this band is about. Some of the members of this band have been mistreated and abused as a children, personally. We would never, COULD never ignore, condone, or even associate with such behavior. At this time we are too emotionally drained to make plans for the band’s future, but due to the nature of these allegations, we feel it is impossible to continue with anyone linked to such allegations, thus, whatever the future holds for Blood For Blood, it will not include Erick “Buddha” Medina. Our most sincere apologies to anyone effected by this situation.

Lastly, as mentioned before, we are unable to make concrete plans for the band’s future. But for the time being we would like to remind everyone that Blood for Blood has ALWAYS been the story of “White Trash Rob,” as told through HIS eyes and through HIS words. Since the allegations surfaced, the hardcore scene as a whole has seemed to understand that the rest of the band is entirely separate and blameless in this thing and we are grateful. However, we have seen and heard some comments from people expressing regret for supporting the band in the past or getting Blood For Blood’s words or imagery tattooed on their bodies. Just to be clear, for the last 16 years Rob has written and produced ALL the words and music for Blood For Blood. And those words and music are as sincere and honest today as they were a month ago.

Once again, our most sincere apologies to anyone affected by all this.”

More News On Blood for Blood: