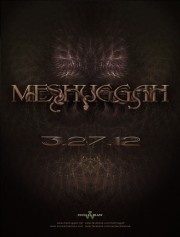 Swedish extreme technical metal geniuses Meshuggah have stopped dragging their feet formally announced their eighth studio album, Koloss. The album will be released on Nuclear Blast March 27th and is the first album in four years from the quintet.

“As always, we try to take our music in a slightly different direction with each album and with Koloss we feel that we really nailed what we were going for. Organic brutality, viscera and groove all crammed into a 54-minute metalicious treat, best avoided by the faint of heart!!”

Previously, Meshuggah released obZen in 2008 and it was fucking fantastic.